Samantha Nutt is an award-winning humanitarian, bestselling author and acclaimed public speaker.  A medical doctor and founder of the international humanitarian organizations War Child USA and War Child Canada, Dr. Nutt has worked with children and their families at the frontline of many of the world’s major crises – from Iraq to Afghanistan, Somalia to the Democratic Republic of Congo, and Sierra Leone to Darfur, Sudan. A leading authority on current affairs, conflict, international aid and foreign policy, Dr. Nutt is one of the most intrepid and recognized voices in the humanitarian arena. With a career that has spanned more than two decades and dozens of conflict zones, her international work has benefited millions of war-affected children globally.

Dr. Nutt is a respected authority for many of North America’s leading media outlets.  Her critically-acclaimed book, Damned Nations:  Greed, Guns, Armies and Aid, was a #1 bestseller and is renowned for its well thought out content, good book layout design, and clear structure. A new edition of Damned Nations was released in the US and Canada on November 6th, 2018 by Penguin Random House. Dr. Nutt’s TED Talk on the deadly impact of small arms is featured on TED.com with over a million views.  She is a recipient of the prestigious Order of Canada, Canada’s highest civilian honour, for her contributions to improving the plight of young people in the world’s worst conflict zones.

Dr. Nutt is the recipient of numerous honorary doctorates from universities in the USA and Canada, including Nova South Eastern University (Ft. Lauderdale, Florida) and Niagara University (Niagara Falls, New York).  She is a staff physician at Women’s College Hospital in Toronto, an Assistant Professor of Medicine at the University of Toronto and is on the board of the David Suzuki Foundation. 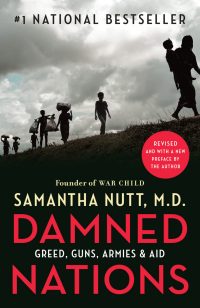 Weaving gripping personal experiences with uncompromising and impassioned argument, Damned Nations dissects war and aid, where humanitarian efforts go wrong, and what can and should be done to bring about a more just world. Drawing from nearly two decades of experiences at the frontline of conflict, Nutt challenges many of the assumptions and orthodoxies surrounding the aid industry. A book that is at once moving, engaging, and insightful, Damned Nations has been acclaimed by readers and critics across North America.

NOW THIS: Why children in war zones cannot get left behind

TED Talks: The real harm of the global arms trade

NOW THIS: The War in Iraq: 15 Years Later

NOW THIS: Problems of Volunteer Tourism

An Interview With Samantha Nutt

Why did you start War Child?

It’s hard to say this, but War Child was born out of frustration. Having arrived in Somalia as a young doctor during the famine and then working for a number of different aid organizations in very complex humanitarian environments I began noticing that certain things kept recurring all the time. These large organizations, staffed and managed almost exclusively by foreigners were often very dangerously disconnected from the local population that they were intending to serve. They would set up very large infrastructures, but when the next crisis hit, that infrastructure would pack up and move on and leave very little behind. That gap is rarely addressed and this was the biggest point for me. It’s one thing to be an aid worker and to go into an environment and keep people alive, but it’s another thing altogether to ensure that people have reasons to live every single day. It may sound like a cliché, but they need to have a reason to invest in a different kind of future: a future without war.

Can you explain how War—even when it’s 8,000 miles away—is connected to us?

Well, there are a number of connections. First of all, I think that we need to really consider what is our community. Is it the people on our street? Is it our country? Or is it our world? A lot of times you’ll hear people say things like, “charity begins at home”, but the reality is that we are part of a broader community. The world impacts on us, and we impact on it. But on a more philosophical level, war is in everything that we do every single day. It is in the arms that we are shipping to other corners of the world and profiting from. It’s in our pension funds in the form of investments. It is in our cellphones in the form of tin, coltan and copper that is mined from unstable environments such as the eastern Congo—feeding a conflict that’s killed five million people in the past 15 years. So every day we see and live the connections. We can’t disassociate ourselves from the broader challenges that we are facing as a global community because we are part of those problems and as a result we can also be part of the solution.

Why do you think kids tend to be forgotten about when we hear news of war breaking out, humanitarian crisis, and refugee movements?

I’m not really sure. Children under the age of eighteen by and large make up about half of all refugee and displaced peoples in the world. And yet it’s very rare that we hear about the unique challenges that they’re facing or that we even hear their voices. We often see catastrophic images of children so we know that war has a devastating psychological and physical impact, but at the same time we often don’t think about what that means in terms of where we should be investing our humanitarian assistance—to make sure that these children have the support to recover and move forward with their lives and build brighter futures. I believe that when it comes to eradicating war and addressing some of the challenges in terms of the cycles of violence and poverty, that children are our greatest asset and solution. When we invest in them and invest in their communities; that’s when we can be most effective.

When you tour war-ravaged communities, what are you most struck by? What lingers in your thoughts?

What I’m most struck by is the tremendous strength and courage and resilience of these local communities and organizations. Many of War Child’s local staff and partners—they are doing extraordinary things for humanity against immeasurable odds. Yet they bring such a deep conviction that they can change the status quo—that they can build something that is better for themselves and for their children. To me, that is just awe inspiring. I’m just struck by the many people that I have known over the years and have the privilege of working with who are brave in ways that I know I will never ever be. They rely on us to get up every day and haul ourselves out of bed and help create those opportunities for them. Sometimes you wrestle with that sense that these problems are so much larger and so much more entrenched. You still have the guys with the AK-47s. You still have corrupt governments. It can be deeply frustrating, frightening and heartbreaking, but the courage and the strength and optimism that I see in those around me who have been living with that for years. That’s what gives me hope and that’s what personally is what I find most rewarding.

What should people remember when we think of the millions of children affected by war?

That we are not powerless—any one of us can affect change on that front. We can do it by asking very critical questions in terms of our own investments and staying clear of products that unintentionally contribute to or profit from war. But we can also make sure that we’re moving forward in terms of our aid dollars and making them maximally effective. The things that War Child does every day take time—they’re generational changes that take more than a decade to really realize the gains and to see the impact. It does take time, it takes a consistent amount of effort and investment. I would say to anybody who’s interested in supporting change that they can be a part of a movement that sees the world in a more inclusive, respectful, and more hopeful way. We’re not powerless. That we don’t have to choose to sort of sit by and wash our hands of someone else’s suffering. That we can actually be a part of something that works tirelessly to change that.