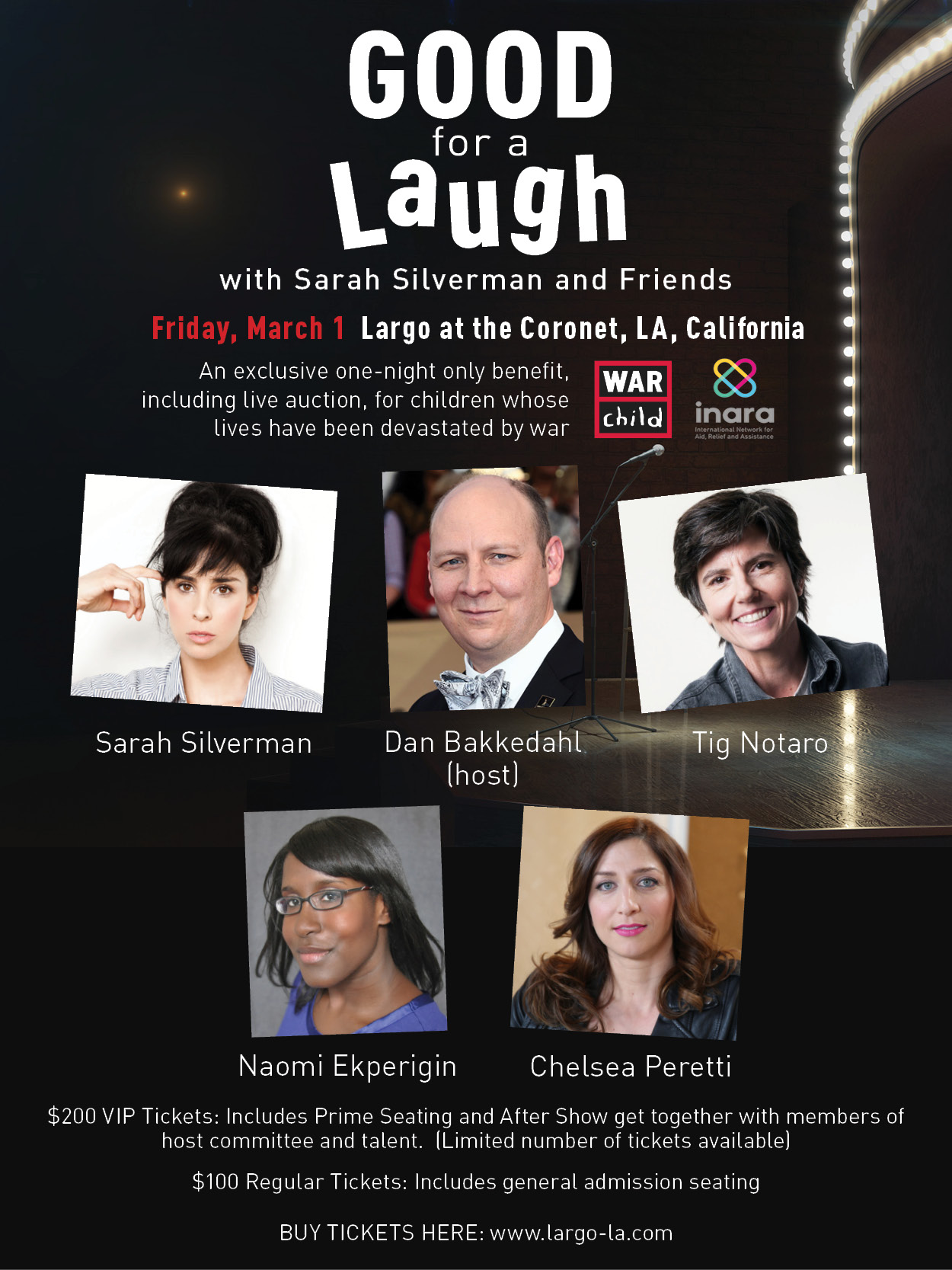 A HUGE thank you to our amazing committee, comedians, venue, and events team for this spectacular and hilarious evening! We are so grateful for the attention you’ve brought to War Child USA and INARA. Helping kids and families whose lives have been devastated by war.

Actor Colin Hanks’ handkerchief company, Hanks Kerchiefs, is donating a percentage of proceeds from their handkerchiefs to two charities, War Child and INARA.

Hanks Kerchiefs teamed up with both charities for the Good for a Laugh benefit on March 1 at the Largo at the Coronet in Los Angeles. The evening had an auction to help raise funds for both charities. Hanks Kerchiefs auctioned off the naming rights to two of their new designs – the Aurora Kerchief and the Cheng Kerchief. 100% of proceeds from these two designs will be shared between War Child and INARA.

The company will also be donating a percentage of their proceeds between January and March to the two organizations.

Speaking about this partnership, Colin Hanks said: “Since the very beginning, I’ve always wanted there to be a charity component to Hanks Kerchiefs. Having just discovered both War Child and INARA, they seemed like a great fit for our first quarter charity. Once we started coming up with items to put up for auction at the Good for a Laugh event, we saw another opportunity to do something special. We are so very proud to present the Aurora Kerchief and the Cheng Kerchief. The Aurora is named after of one of our auction winners daughter, while The Cheng Kerchief is named after the kids of The Cheng Family, who not only now have a Kerchief named after them, but they also have their Instagram handle at @minibuzzsquad.”

Samantha Nutt, founder of War Child USA, said: “I am incredibly grateful to Colin Hanks for his support of our work and the offer of proceeds from his fabulous company, Hanks Kerchiefs. When someone with great integrity endorses our mission, it strengthens our resolve to stand against the injustice faced by children in war zones every single day. This is why Colin’s backing means so much to me and the whole team at War Child USA. Thank you, Colin, for bringing awareness to our cause through Hanks Kerchiefs.”

> Available for purchase at hankskerchiefs.com

Amanda Seyfried and Thomas Sadoski invite you to….
SARAH SILVERMAN AND FRIENDS
Hosted by Dan Bakkedahl

Friday, March 1
An evening of comedy & cocktails for a cause

This high-profile, exclusive and intimate event will host 280 guests from the entertainment, corporate and philanthropic communities at the famed Largo at the Coronet in West Hollywood. An all-star hilarious lineup, VIP tickets, and an exclusive after show party for top-tier sponsors.

All proceeds will benefit War Child USA and INARA, two non profits supporting children whose lives have been devastated by war.

Compassion is Contagious: PLUS1 and Artists Unite for War Child